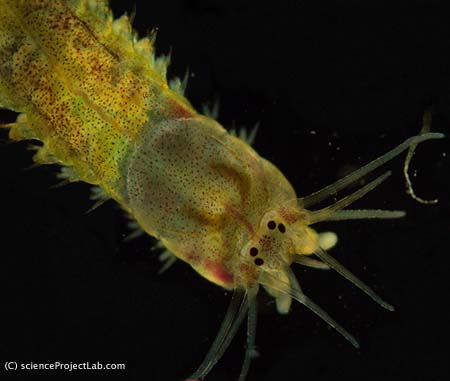 This specimen of predator sea polychaetae was found on the piece of algae and have size of approximately 5mm (~1/4 of inch). This image was taken with 40 x magnification using dark field microscopy technique.

Polychaeta is a class of bristleworms. Most of them live in sea and salty waters. Their body segmented and each segment have pair of little "legs" called parapodia. Each parapodia ends with many bristles, hence name of the class bristleworms.

Polychaetae can be very different in size and form. Some of them are hunters such as this one that have well defined head with 2 pairs of eyes (brown dots). It's eyes are fairly primitive and probably can not see much more than change in the shadowing so they should rely on their antennas to find food. It's jaws are hidden inside the head. When it finds prey it throw jaws out and catch it (think of Aliens :)).

Big blood vessel is visible on the top of the head and along the body.